Note: This post is outdated. You can find the newest results here.

On January 29, 2021, Elon Musk—richest person in the world—unexpectedly changed the description of his Twitter account to #bitcoin. The price of Bitcoin rose by approximately $6,000 in a matter of hours, increasing its market capitalization by $111 billion. 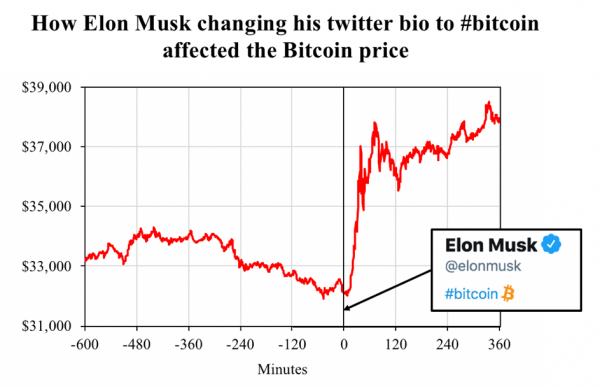 I conduct an event study to investigate six crypto-related Twitter activity of Elon Musk and analyze what impact it had on return and trading volume of the corresponding cryptocurrency (Bitcoin or Dogecoin) in the following minutes and hours. The study contributes to the literature on the impact and role of social media, specifically Twitter, and the influence of sentiment and investor attention on cryptocurrency markets. 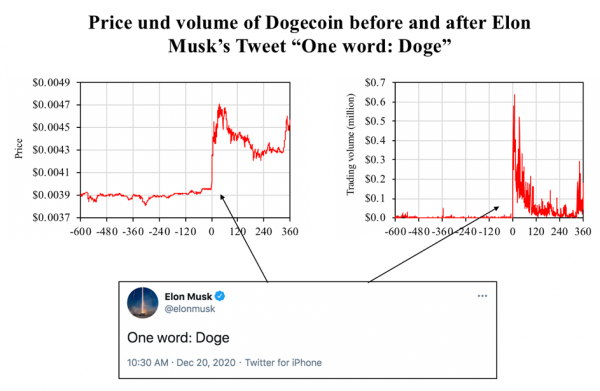 The results illustrate the significant impact Elon Musk’s Twitter activity can have on cryptocurrency markets. While the Bitcoin event might have been a serious sign of support for Bitcoin, the tweet about Dogecoin was a joke—as Musk admitted himself. Considering that a joke by the richest person in the world has caused such a market reaction leads to the question under which conditions people in the public eye should comment on specific cryptocurrencies. If a single tweet can potentially lead to an increase of $111 billion in Bitcoin’s market capitalization, a different tweet could also wipe out a similar value.

You can find the full study under this link. The updated version from Jan 2022 is here.