About the blog series

More than a decade since the launch of Bitcoin, cryptocurrency has become a phenomenon of societal and economic relevance. This post is part of the Blockchain Research Lab’s Blog series on cryptocurrency adoption, highlighting different aspects of prevalence, use and perceptions. The analyses are based on a survey of a representative (in regard to gender and age) sample of 3,684 German citizens, sourced between February and March 2019. The presented results are based on in-depth research and analyses, the scientific publications of which can be found here and are referenced in the post. All parts of this Blog series can be found here. If you are interested in further information, would like to get in touch or discuss collaborations, contact me via steinmetz@blockchainresearchlab.org.

In the previous post of this Blog series, I was presenting and interpreting our results in regard to the demographics and socio-economics of cryptocurrency users. Having disclosed the characteristics of average cryptocurrency users, the logical next step is investigating which factors are statistically relevant for predicting cryptocurrency ownership. The literature review of the final publication shows that a considerable number of surveys about cryptocurrency ownership in different countries have been conducted in the past. Though, only a small number of studies go beyond publishing descriptive statistics. Some don’t even disclose enough information on their samples, e.g. if the samples are representative of the respective populations or not. It was thus especially interesting to find out which characteristics are especially meaningful in the context of cryptocurrency ownership, and to which extents. Such information informs future research on the topic, regulators seeking to protect vulnerable players as well as businesses affected by an increased cryptocurrency prevalence.

In the following we look at correlations across the variables which we were able to investigate and the multivariate analyses of our paper, which focused on disclosing the determinants for our respondent’s (1) knowledge about cryptocurrency and blockchain technology, (2) current and former cryptocurrency ownership and (3) estimations of trustworthiness towards cryptocurrency. 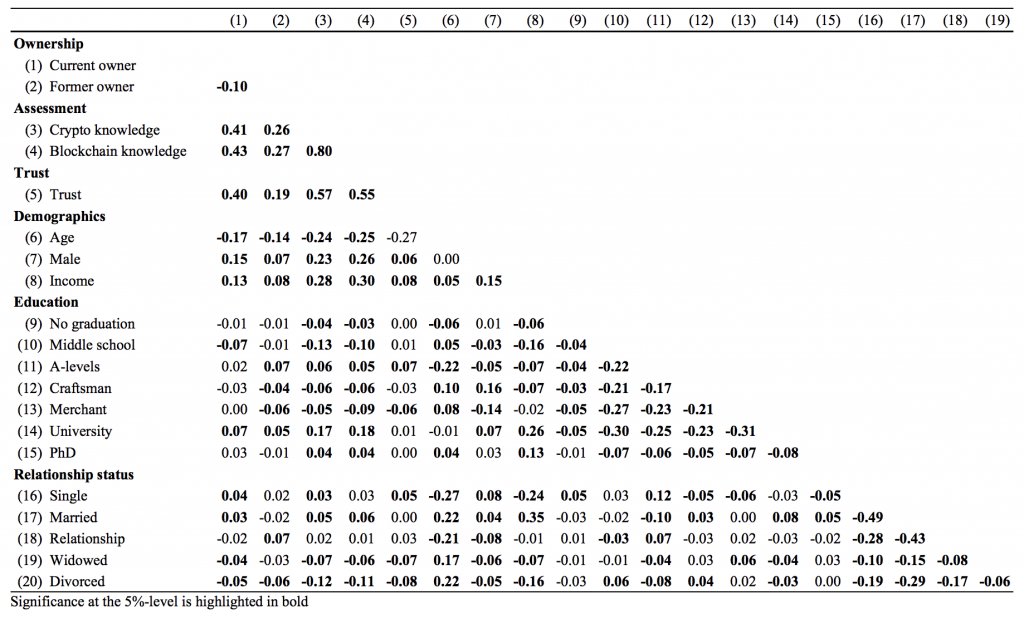 Other interesting correlations relate to knowledge and ownership. Current and former ownership positively correlates with knowledge. While this is also not surprising, it allows for the interpretation that people getting deeper into the topic are buying, as opposed to refusing to buy, because they perceive the (whichever) characteristics of cryptocurrency (or blockchain technology) advantageous/favorable/promising. Further, we find that trust levels, reported by the respondents on a scale from zero to ten, are also correlating positively with ownership and knowledge. This is an important finding: Current owners of cryptocurrency tend to report high trust levels and high levels of knowledge. This indicates a noticeable relationship, which we will elaborate on further in the following sections. 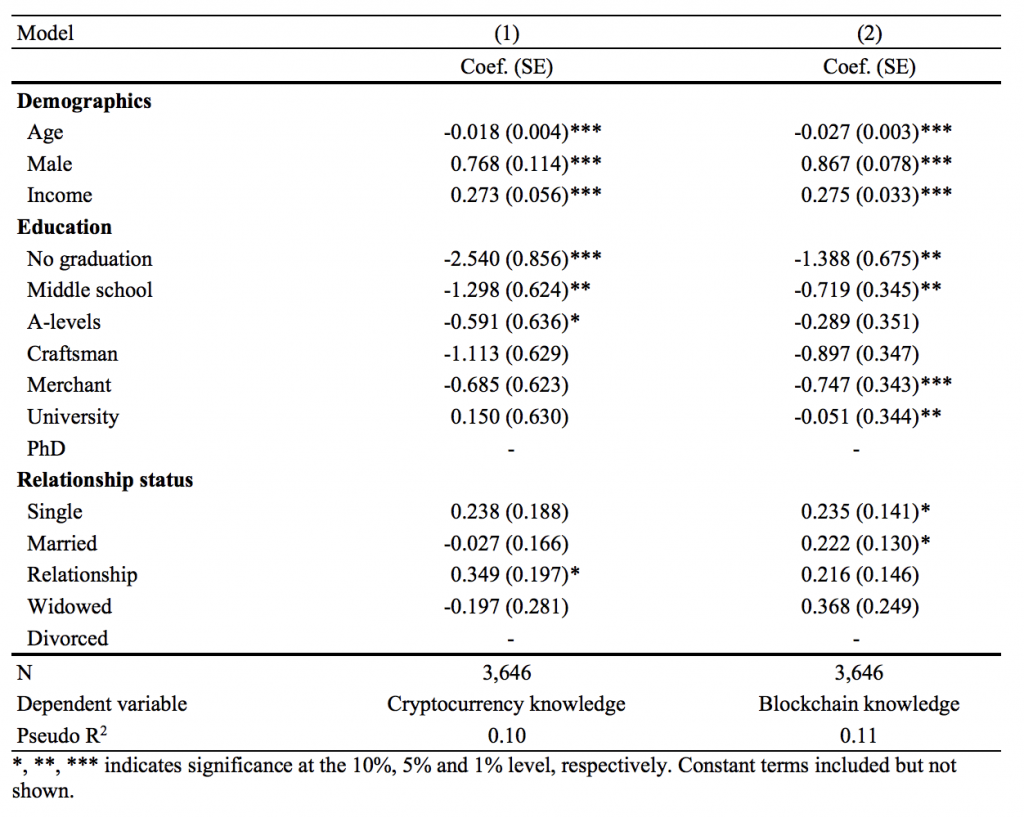 Regressing on cryptocurrency ownership reveals similar results in regard to demographics and socio-economics. Predictors for current and former ownership are young age, male sex, high income and, for current owners, high educational statuses. When extending the model with knowledge- and trust-variables, we find that knowledge about cryptocurrency and blockchain technology, as well as high trust levels are predictors of both former and current ownership of cryptocurrency. Referring to the above-described relationship between knowledge, ownership and trust, these results further support the assumption of an important triangular interrelation between them. 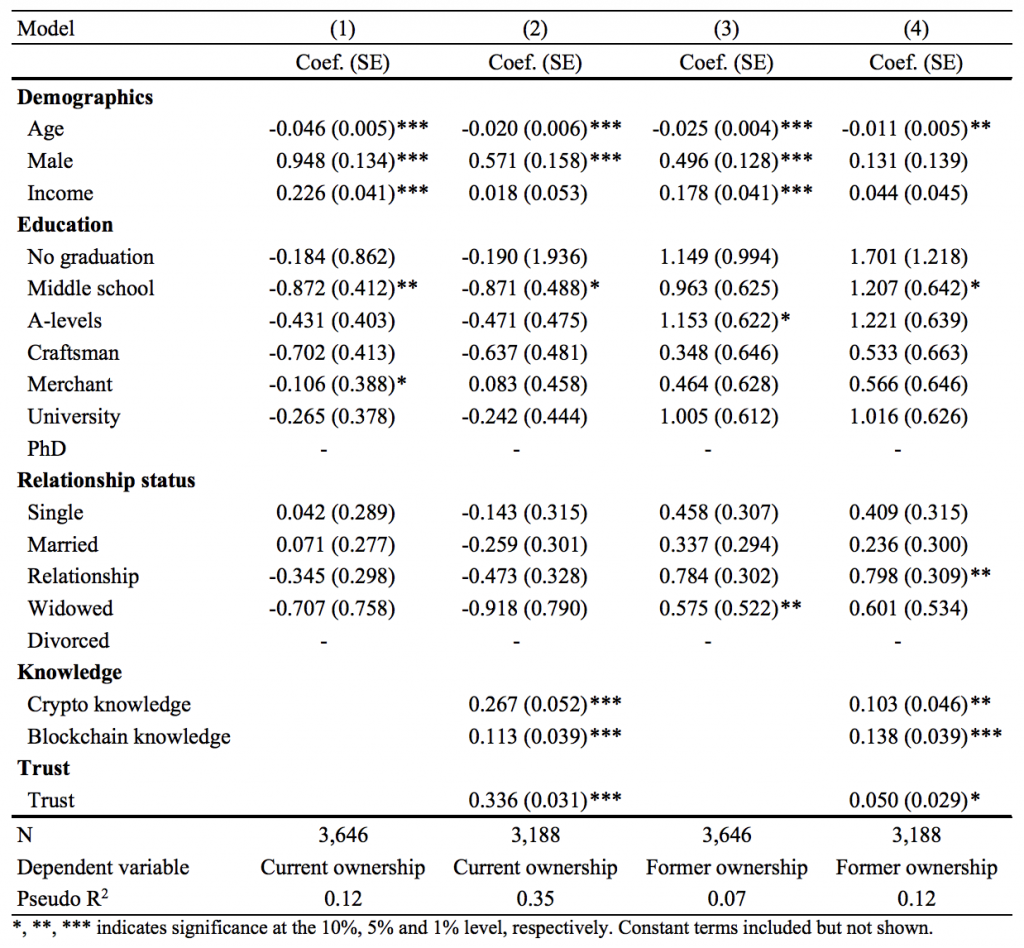 Lastly, we formulated three models for regressing trust, or the trustworthiness which respondents report to have in cryptocurrency. We intentionally did not ask for specific aspects of trust but for the ‘intensity’ on a scale from zero to ten. Further, we allow respondents to interpret, which aspects of cryptocurrency they perceive as trustworthy, which they don’t, and eventually report a sort of sentiment parameter. Different aspects of trust estimation could include the integrity of different projects, the occurrence of hacks or the robustness of the underlying blockchain technology. In contrast to other surveys who use pre-defined answers, e.g. “how high do you perceive the possibility of hacks of projects?”, we present a general measure of attitude which can be compared across owners and non-owners, and longitudinally. 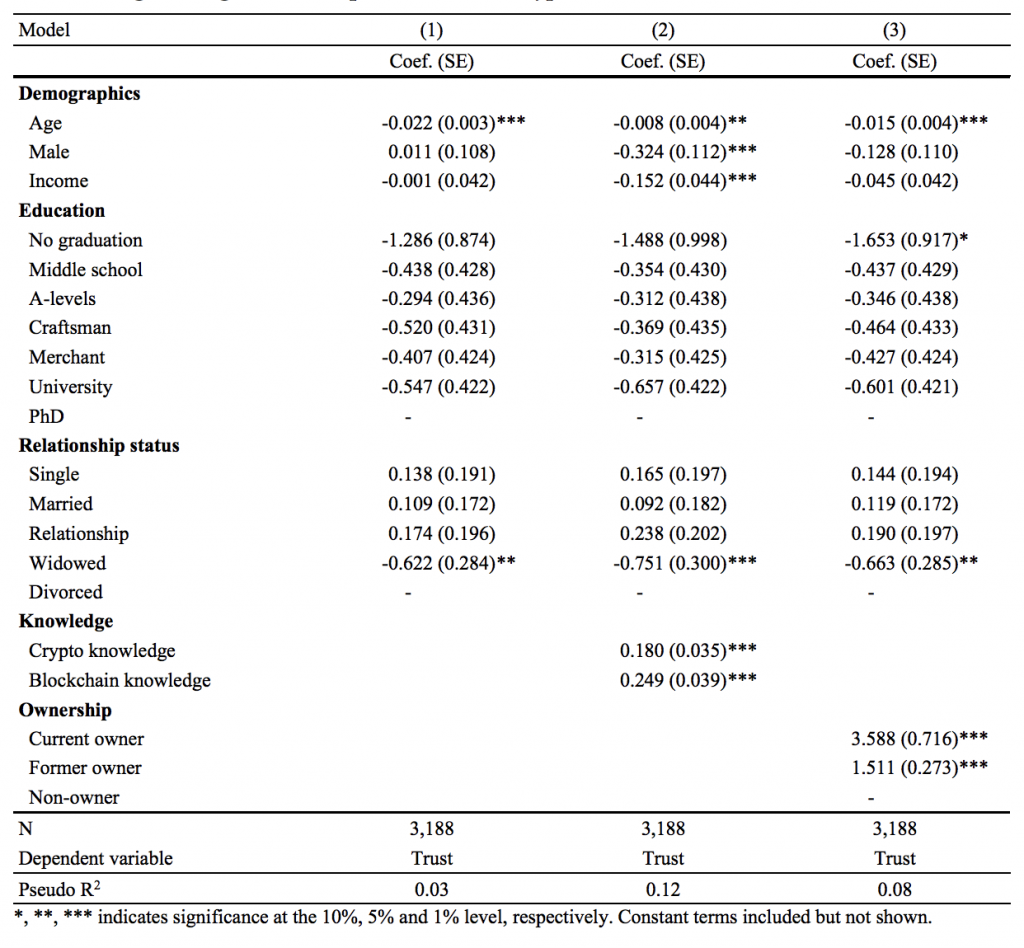 In contrast to the other regression models, model 2 shows that age, male gender and income negatively affect trust. This would indicate that trust perceptions stand in different relations to income and gender than knowledge and ownership. Among cryptocurrency owners, it seems there are different user groups, and the ones that have higher trust in cryptocurrency are not the ones with the high incomes and not predominantly male. In turn, cryptocurrency ownership might be driven by users being trustful towards the technology and other users being motivated differently, e.g. financially. However, these interpretations are to be handled with care, since model 1 and 3 don’t strongly support these findings and more research is needed to uncover user groups among cryptocurrency owners. Coming back to our prediction of trust, Model 3 shows that both ownership variables are positively affecting trust. The fact that the coefficient of former ownership is considerably smaller than the coefficient describing the effect of current ownership on trust-levels indicates, that current owners may have a biased perception because they have ‘skin in the game’ – an interesting avenue for future research. Since both the effects of current and previous ownership of cryptocurrency are significant and comparably large, the assumed triangular relationship between trust, ownership and knowledge has now been analyzed from each perspective. What we don’t know at this point, however, is which of these variables is most influential and which direction of influence is prevalent. In other words, many questions arise, e.g. if trust may be a consequence of increasing knowledge on the topic, and, in turn people become owners, or, if ownership amplifies owners’ self-perceptions of knowledge and the perceptions of the trustworthiness of the industry?

In the paper we found an interesting triangular relationship between knowledge, ownership and trust. While this relationship is rather intuitive for people familiar with the matter, we firstly investigated and establish it empirically, which lays important foundations for future research. Further investigating how these variables interrelate and influence each other, which are most important, and which are characteristic for specific user groups is important to grasp a clearer picture of cryptocurrency users and usage behavior. Apart from this, we empirically validate the descriptive findings (here) about cryptocurrency users, who have been found to be tendentially young, most likely male, well-off and well educated. Future researchers, regulators and industry stakeholder can use this information to refine the target users of their measures and messages.

Ownership, uses and perceptions of cryptocurrency: Results from a population survey

Stay up to date: Register now for our free newsletter.