About the blog series

More than a decade since the launch of Bitcoin, cryptocurrency has become a phenomenon of societal and economic relevance. This post is part of the Blockchain Research Lab’s Blog series on cryptocurrency adoption, highlighting different aspects of prevalence, use and perceptions. The analyses are based on a survey of a representative (in regards to gender and age) sample of 3,684 German citizens, sourced between February and March 2019. The presented results are based on in-depth research and analyses, the scientific publications of which can be found here, here and are referenced in the post. All parts of this Blog series can be found here. If you are interested in further information, would like to get in touch or discuss collaborations, contact me via steinmetz@blockchainresearchlab.org.

Cryptocurrencies are native digital assets of open access public blockchain systems with varying purposes, e.g. to align the participants’ incentives in economic coordination mechanisms ​(Rauchs et al., 2018)​. While Bitcoin and the first cryptocurrencies are, most importantly, alternative payment networks, the blockchain and cryptocurrency industry has emerged to facilitate a variety of use cases for cryptocurrencies, including the replication of existing and development of novel financial instruments (decentralized finance, DeFi), collectables and digital art (non-fungible tokens, NFT) or representing specific user-rights (governance). There is no broad consensus if these token types are to be classified as cryptocurrency, crypto-asset or alternative asset class, but this is not of importance here. Rather, the point is that the phenomenon of cryptocurrency is characterized by constant innovation and evolving narratives which attract new users and developers and eventually and steadily increases the societal relevance of the phenomenon. Although Bitcoin has passed its 10th anniversary already, cryptocurrency has long been a niche phenomenon until at least the ICO-boom in late 2017/early 2018, when prices skyrocketed and media coverage increased – some might say crypto still is in its infancy. Accordingly, its societal and economic relevance has long been fairly low which is why research on its users has been and still is comparably scarce.

In the following, we shed light onto the demographic and socio-economic profiles of cryptocurrency users. Although the sample is restricted geographically to Germany, the fact that it is representative of German citizens gives it a legitimacy to derive assertions for the whole population of a Western, comparably wealthy, state – something that surveys without a representative sample simply cannot provide. The importance of a representative survey is thus crucial to make general and well-founded statements.

Among 3,864 respondents, we found a prevalence rate of current ownership of 9.2% and of former ownership 9.1%. The latter term describes users who have owned cryptocurrency previously to the survey and meanwhile sold, lost, or used them. Other surveys find tendentially lower rates, ranging from 3% to 8% (see here). Deviations between survey results are attributable to methods of sourcing data, e.g. telephone vs. online. Also, the time when the survey was conducted can contribute to greater differences, since an increased media coverage during the ICO-craze has led many consumers to buy cryptocurrency.

Current cryptocurrency owners in Germany are on average 38 years old and 74% are male. Current owners are on average much younger (∆ 10 years) and way more often male (∆ 27%) than non-owners, but also slightly younger (∆ 1 year) and more often male (∆ 11%) than former owners. It can be assumed that the high volatility of cryptocurrency prices has mostly attracted young men to enter the space. This is in line with men being known to be tendentially risk-affine. 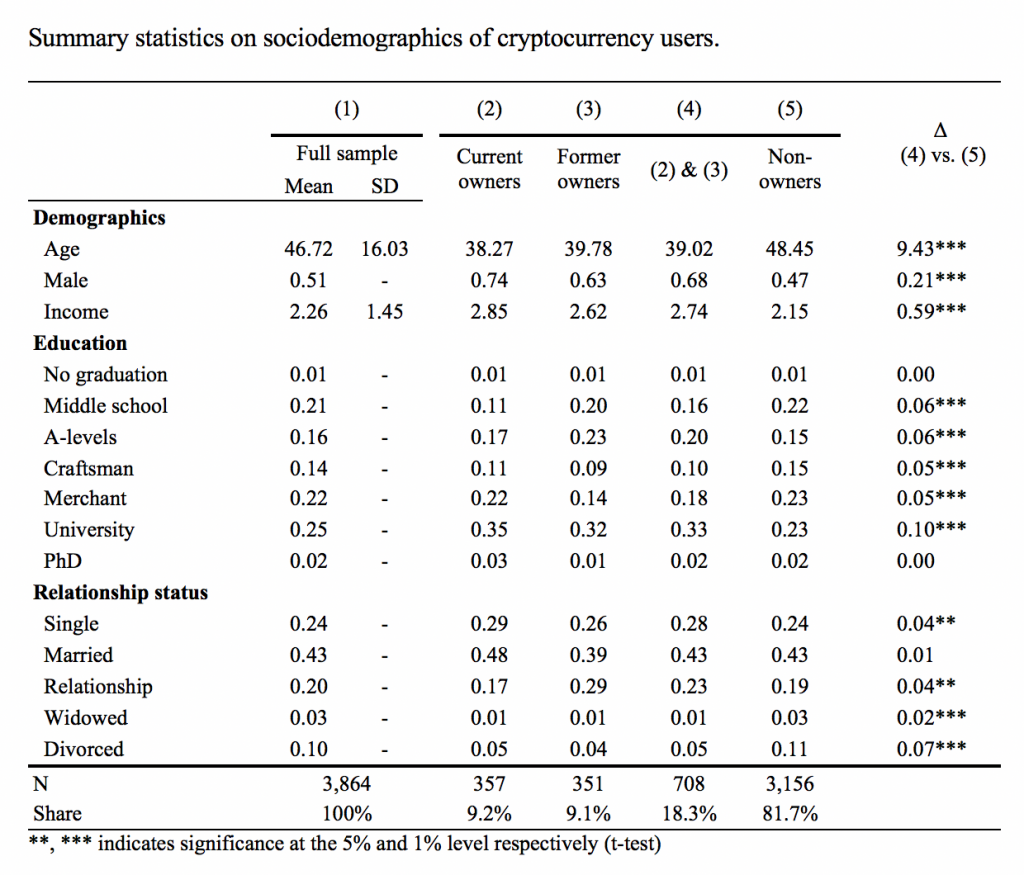 Based on the current state of scientific literature on the topic, there is no simple answer to any of these questions. Numerous factors play a role in the decision-making process of acquiring cryptocurrency. In a follow-up blog post, important drivers of cryptocurrency ownership will be assessed. The results suggest that the familiarity with and understanding of the technical constructs of blockchains, the economics behind cryptocurrencies and the overall ideas behind the phenomenon, are major drivers of cryptocurrency ownership. Since blockchains in fact present quite complex and sophisticated constructs of economic, technical and mathematical components, it is likely that, at the current stage of adoption, owners of cryptocurrency are indeed people who are capable of understanding these. This, however, is just one interpretation among many others and shall be discussed in another post.

To complete the socio-economic profile of cryptocurrency users, we assessed respondents’ relationship statuses. In comparison to non-owners, cryptocurrency owners are more often single (28% vs. 24%) and more often in a relationship (23% vs. 19%). Across both groups, 43% of the respondents are married. Attributable to the younger age of owners, less respondents are widowed (1% vs. 3%) and divorced (5% vs. 11%) than non-owners. Taking a closer look at the current cryptocurrency owners, a remarkable share of 48% is married, 29% single and only 17% in a relationship. A high share of singles among owners is not surprising: it can be interpreted that current owners are investing because they are not having too many financial responsibilities, which is why they can afford to be more risk-seeking. This interpretation, however, is in opposition to the finding that 48% of the current owners are married – more than in any other subsample. When associating the married social status with having children, and thus financial responsibility, the interpretation above wouldn’t hold, since financial responsibilities would tendentially imply a lower risk-affinity. But since the data doesn’t comprise information about household size, we cannot assume that married respondents are having children. An explanation for such high share of married respondents among owners could be the relationship between income and being married: The correlation analysis reveals that a high income positively correlates with ‘being married’ (see here). As a result, the comparably high average income of current owners would explain the high share of married respondents among current owners.

While the analyses reveal a quite distinct socio-economic profile of the sum of cryptocurrency owners (current and former owners) compared to non-owners, the heterogeneity within the group of current and former owners is also quite strong. Current owners are younger, more often male, better educated and better-off financially than former owners. Moreover, we found that they are more often single and far more often married. The deviations of current and former owners indicate that the overall structure of users of cryptocurrencies has been or is currently subject to change. Younger, tech- and risk-affine people are being increasingly attracted by cryptocurrency and entering the game. This wave of new users could be attributed to the ICO-craze of 2017/2018, which led many new users to acquire cryptocurrency in speculation of high gains. Another interpretation is that new users are not speculators but well-educated developers attracted by an innovative and fast-evolving industry. The answer is probably a combination of both, and the different forms of engagement and usage, apart from speculating and investing, are not considered.

With our analyses we contribute to enhancing the understanding of cryptocurrency users and usage, which holds important societal and economic implications – for users, regulators and businesses alike. Certainly, more in-depth research is needed to grasp a clearer picture of cryptocurrency owners, users, contributors and advocates – especially in the light of novel use cases and development, such as NFTs and DeFi, which attract new users and broaden the opportunities and ways to interact with cryptocurrency. We aim to inform and encourage future research on the topic, and welcome feedback, recommendations and collaboration enquiries.

Ownership, uses and perceptions of cryptocurrency: Results from a population survey

Stay up to date: Register now for our free newsletter.