This blog post is an invited guest post by Dr. Aman Saggu. It is based on his article ‘The Intraday Bitcoin Response to Tether Minting and Burning Events: Asymmetry, Investor Sentiment, and “Whale Alerts” on Twitter’ that was recently published in Finance Research Letters. If you have any questions or comments, please feel free to contact Dr. Aman Saggu directly.

In April 2022, the British government announced plans to recognise stablecoins as a valid form of payment in the United Kingdom. Stablecoins are cryptocurrencies that have their value pegged to other assets, such as the US Dollar or gold. They are widely used to trade cryptocurrencies on exchanges and to pay for peer-to-peer financial services in the decentralised finance (DeFi) economy. So far, USDT is the world’s most widely traded stablecoin. It was created in 2014 by the private company Tether Ltd. and was designed to be worth $1. Tether’s USDT stablecoin has surged in popularity, with its market cap increasing from $1.5 billion in 2018 to a high of $80 billion by mid-2022 and more than $65 billion by July 2022, making it the world’s third largest market cap cryptocurrency after Bitcoin and Ethereum. This meteoric growth has fuelled media speculation about the influence of Tether’s USDT stablecoin on cryptocurrency markets and accelerated the development of stablecoin regulations.

Do markets view Tether’s changes to the USDT supply as good news, as bad news, or are they indifferent?

In the midst of the ongoing debate over the influence of Tether’s USDT stablecoin, the article “The Intraday Bitcoin Response to Tether Minting and Burning Events: Asymmetry, Investor Sentiment, and “Whale Alerts” on Twitter” aims to address a fundamental question: do markets view Tether’s changes to the USDT supply as good news, as bad news, or are they indifferent? In classical finance, when central banks create new money (known as monetary expansion), asset values typically rise, but when they destroy money (known as monetary contraction), asset values usually fall. Do Bitcoin prices react the same way when Tether creates USDT (process known as minting) and destroys USDT (known as burning)?

Tether mints new USDT on a blockchain in exchange for US dollars when its clients, such as cryptocurrency exchanges, request it. Clients can also redeem USDT for US dollars, in which case the USDT are burned. For this reason, the published article builds on the assumption that investors view USDT minting as good news and USDT burning as bad news because these events signal higher or lower underlying demand for cryptocurrency and DeFi services. To evaluate the impact of these events on Bitcoin prices, the article identifies every USDT minting and burning event on every blockchain ever used by Tether over the 2014 to 2021 period.

Fear of Missing Out (FOMO) in the Crypto Space

The initial investigation reveals that Bitcoin prices rise 5 to 30 minutes after Tether mints $1 billion in USDT: 0.4% after 5 mins; 0.5% after 10 mins; 0.6% after 15 mins; and 0.8% after 30 mins (i.e., investors view Tether’s USDT minting events as good news). Tether may play a role similar to that of a central bank in the cryptocurrency economy, as indicated by the rise in Bitcoin prices following their addition of liquidity. Contrary to expectations, investors react to Tether’s minting events but not to its burning events (i.e., investors regard Tether’s burning events as non-news). The findings, although unexpected, are consistent with the FOMO (fear of missing out) phenomenon that has been documented in cryptocurrency finance, where investors are more likely to react to positive news (such as Tether minting USDT) than negative news (such as USDT redemptions).

The Role of Market Sentiment and Conditions

The authors extend the analysis to take into account the impact of market sentiment and conditions, employing the Sentix Bitcoin Sentiment Index, the Alternative.me Fear and Greed Index, and the more established Lunde and Timmermann Model for defining bull and bear markets. Bitcoin prices respond more strongly to Tether minting events during good times (bull markets, strong sentiment, and greed) than during bad times (times of bear markets, low sentiment, and fear). Investors do not react to unfavourable news (such as Tether burning USDT), whether it occurs in a bull or bear market. This reinforces the earlier discovery of FOMO in investors’ psychological reactions to Tether’s USDT minting and burning events. 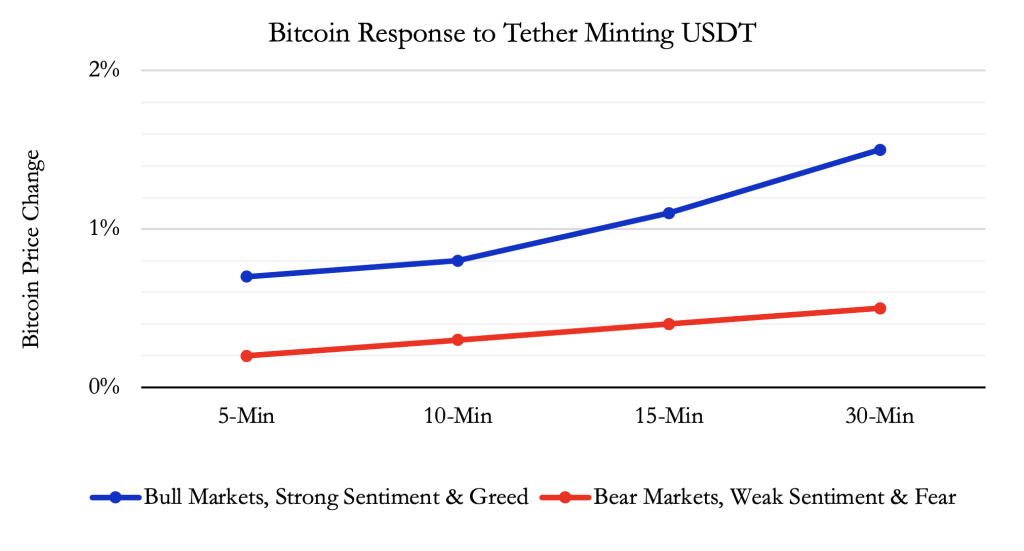 The Influence of Whale Alert

When Tether mints USDT, investors generally do not respond. When Whale Alert tweets the events, Bitcoin prices increase from 5 to 30 minutes

Investors require technical expertise and computing infrastructure to continuously monitor blockchains for important events. They may, however, find much of this information via Whale Alert, which tracks millions of transactions across many blockchains and publicly announces notable cryptocurrency movements on Twitter. Whale Alert tweeted many of Tether’s USDT mining events on the Ethereum and Tron blockchains in near real-time. As of July 2022, Whale Alert had over 2.2 million Twitter followers.

This is the first research article to show that Whale Alert announcements of important events can influence cryptocurrency markets.

The article reveals that it is not USDT mints that investors react to (i.e., Bitcoin prices do not significantly change), but rather when Whale Alert tweets about it. Only then Bitcoin prices increase from 5 to 30 minutes – especially during periods of bull markets, high sentiment, and greed. This demonstrates that investors pay close attention to Whale Alert tweets, which have the potential to move markets. The speed of investor response to news announcements is similar to that observed in the gold market, which shows that Whale Alert can influence cryptocurrency markets in a similar way to major news outlets in traditional finance. This is the first research article to show that Whale Alert announcements of important events can influence cryptocurrency markets.

For investors, the findings could present an opportunity. By following Whale Alert, high-frequency traders could potentially profit from short-term increases in the price of Bitcoin in the 5 to 30 minutes after Whale Alert tweets about Tether minting USDT – especially during bull markets. However, it should be borne in mind that these historical results do not necessarily hold true in the future.

Policymakers considering the adoption of central bank digital currencies (CBDCs) should be aware of the importance of timely, transparent communication about their activities to the public. Moreover, they should urge caution that market behaviours such as FOMO could be transmitted into traditional financial markets.

Credit and thanks to Lennart Ante, Ingo Fiedler, and the Blockchain Research Lab for their contributions to this blog post.