This blog post is based on the BRL Report “Choosing a Distributed Ledger Technology: Looking at the Popularity and Activity of Major Players” by our researcher Guénolé Le Pennec. Read the full paper here.

To conduct any IT project, it is greatly advantageous to rely on well documented software as well as software with active developer community. Both facilitates finding information throughout the implementation of a project and therefore accelerate programming and bug fixes. The development of a blockchain system is no exception to this, as the choice of a Distributed Ledger Technology (DLT) with plenty of resources is advantageous.

Recently, the Blockchain Research Lab was involved in choosing the DLT to implement the DiBiChain blockchain project. This project aims to create a virtual representation of products life cycle allowing the optimization of products usage. In order to develop DibiChain, several different DLT could be used. While choosing the right DLT is strongly driven by its technical characteristics, we also considered criteria such as the quality of the documentation, the activity of the community or the popularity of the technologies.

We published the results of an explorative analysis of the resources and community of candidate technologies in the report. In this report, 15 technologies were evaluated for their available documentation, their popularity, and the apparent efforts of their developer’s community. The fifteen technologies that were studied, and links to different online resources such as Whitepapers, documentation, video channels and chats can be found in the following table.

Inspecting the content of these links, we found technologies developed by Hyperledger, Ethereum, Bitcoin, Stellar, Corda, Quorum, Tendermint, and Hedera Hashgraph, to have a complete and structured documentation. Note, however, that the table does not reflect the state of all available documentation for projects. Almost all technologies had community groups or chats to contact developers and ask for help.

Besides inspecting the resources referred above, we used GitHub metrics to find out how the open-source DLTs compared to one another in terms of collaborative effort. The following graph shows three GitHub metrics the open-source DLTs that were considered which provide informs on the general interest of the public in a project and on the effort that has been invested into that project. 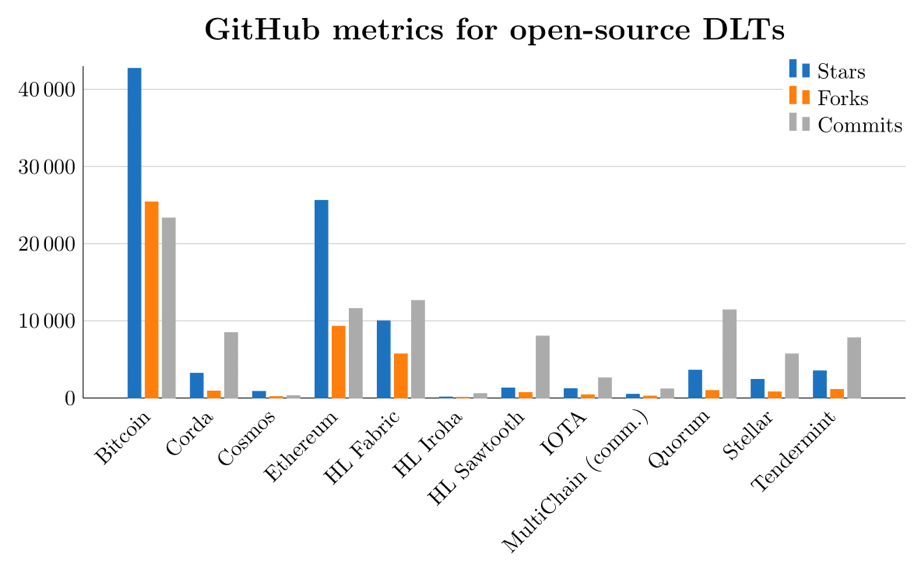 On GitHub, users use “stars” to show their appreciation of a project, or to mark them to come back at a later point. The number of “fork” correspond to copies of the project where developers work. GitHub developers use “commits” to submit changes to the project and make them available to the public.

It is no surprise that Bitcoin and Ethereum had the highest value for all three metrics. Interestingly, Hyperledger Fabric stood well above other technologies for the number of stars and forks, which reflects a strong interest of the community for this technology. Corda, Quorum, Stellar, and Tendermint have a relatively close number of “stars” and “forks”. Finally, “commits”, which can be used as a proxy for effort invested in a project, are equally high for Ethereum, Hyperledger Fabric, and Quorum. The Quorum technology, however, is a special case as it is itself a fork of Ethereum and inherits all commits of the parental Ethereum project.

To see whether the development was still active, we looked at the date of the latest “commit”, which gives an indication of whether the Technology was still actively being developed. Only two projects had more than one month between their latest commit and the date of our research. In particular, Cosmos’ latest commit was done eight months prior to our research and MultiChain’s three months prior, which suggests inactivity in the open source development community in recent times.

In summary, this explorative study revealed differences in the effort invested in the different candidate DLT. Some of them have a high amount of effort invested by the developer community, including Bitcoin, Ethereum, Corda, Quorum, Stellar, and Tendermint, Hyperledger Fabric. On the other hand, most technologies had relatively good amount of supporting resources that could help throughout the development of the blockchain project. These information, will be taken into consideration to choose a DLT for the DibiCHain project, and might be useful to choose your DLT and develop your own DLT-based project.

More information, including data on the popularity of the DLT on social media and their license protection, can be found on the BRL Report “Choosing a Distributed Ledger Technology: Looking at the Popularity and Activity of Major Players”. You can also contact the author directly at lepennec@blockchainresearchlab.org.