Skip to content
Libra: An assessment of the public opinion

Libra: An assessment of the public opinion

This blog post is based on the data set analysed in the BRL Report “Perceptions towards the Digital Currency Project Libra: Germany Q4 2019”. Read the report here: Link.

Libra describes a project that aims to create a blockchain-based financial infrastructure surrounding its inherent asset, the digital currency Libra. The project was initially started by Facebook and is now developed by the Libra Association, a foundation dedicated to Libra’s development, incorporated in Switzerland. The foundation is to consist of various reputable private sector companies, involved in and responsible for the governance of the project.

Libra is hotly debated by politicians, media, central bankers, and the general population alike. Critics argue that it is an attempt to break the state monopoly on the provision of money with a potential dramatic shift in power from the state to a private entity. Supporters of the project see its potential to bank the unbanked, increase efficiency in digital markets and payments in general.

So far, it is unclear how the general population perceives Libra. In our recent report we found that 82% of a representative population sample in Germany know Libra – making it almost as well-known as Bitcoin (85%). On a scale from 0 to 10, the respondents perceive the trustworthiness of Libra rather low at 3.48 and nearly one fifth (19.4%) do not see Libra as trustworthy at all. The majority of the respondents (57%) indicates that they would not use Libra for payments. However, 12% answered would certainly and 31% would possibly do so.

We also found that current and former owners of cryptocurrencies are more open to the project. Also, socio-demographics make a difference: younger age cohorts, men and respondents with the highest and the lowest levels of education tend to report a higher level of trust and willingness to use Libra. 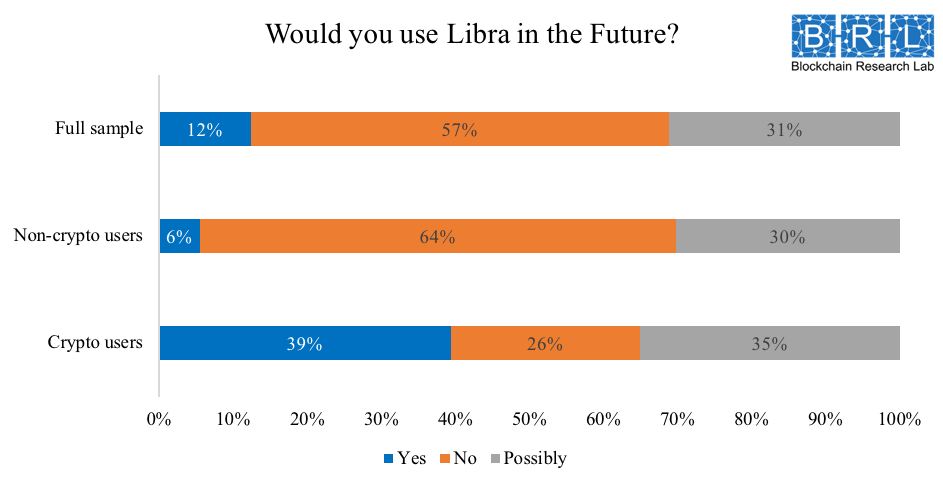