Skip to content
Shaping Bitcoin: Omni/Tether and Veriblock in Late 2018 and 2019

This blog post is based on the data set analysed in the BRL Working Paper “Dominating OP Returns: The Impact of Omni and Veriblock on Bitcoin” by our researchers Dr. Elias Strehle and Fred Steinmetz. Read the full paper here. 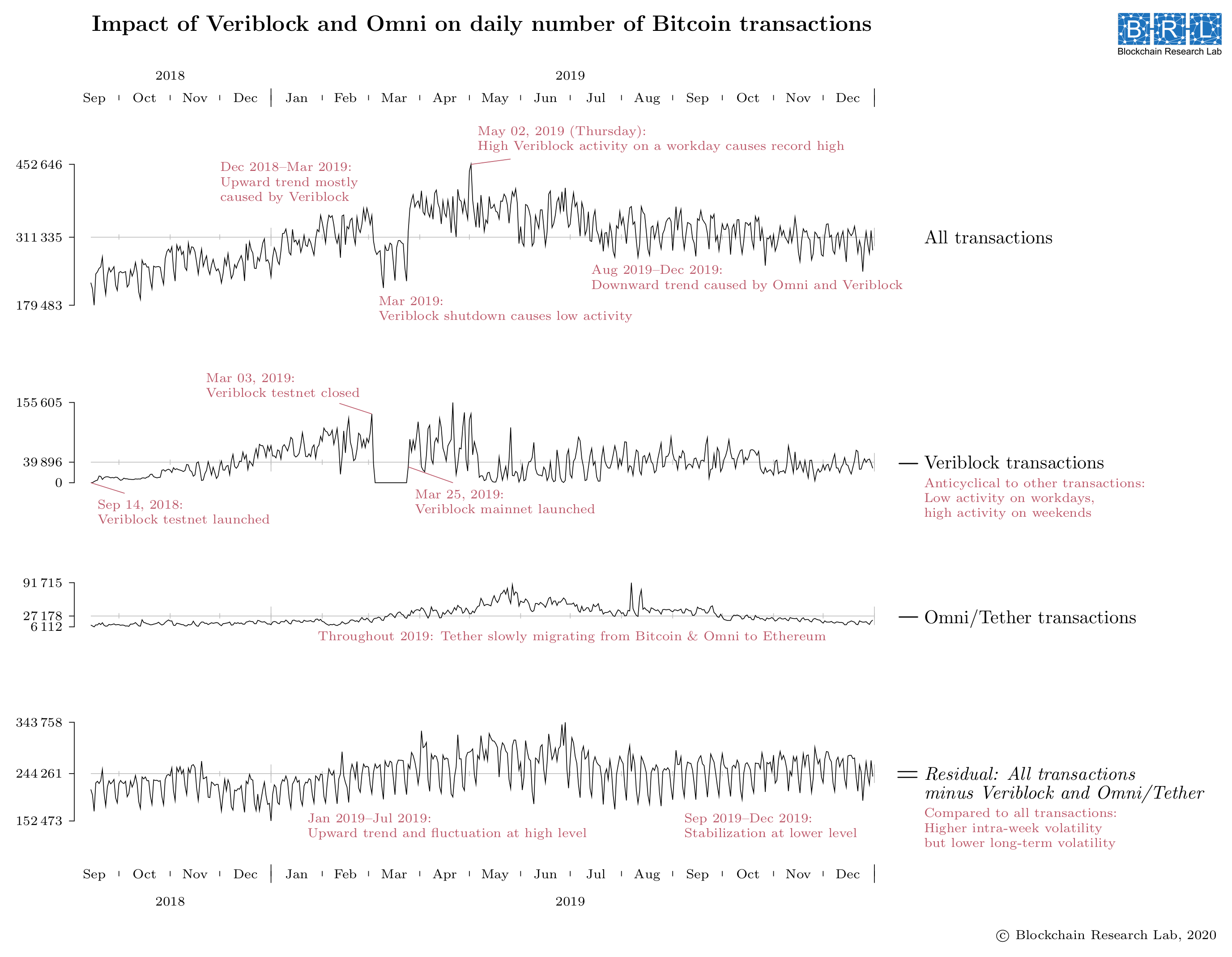 Many long-term trends in overall Bitcoin activity were in fact changes in the activity of Omni/Tether or Veriblock. The rising number of Bitcoin transactions in late 2018 and early 2019, the sudden drop in March 2019, the peak on May 2, 2019: These events were mostly or entirely caused by Veriblock. Similarly, the steady decline of Omni/Tether transactions after May 2019 is recognizable in overall Bitcoin activity as a persistent downward trend.

The residual time series therefore tells a very different story about transactions on Bitcoin than the time series of all transactions: Without Veriblock and Omni/Tether (and ignoring intra-week variation for the moment), activity on Bitcoin was much more predictable, subject only to gentle and long-running trends. Most of the irregularity was caused by Omni/Tether and Veriblock.

On an intra-week scale, however, the opposite is true. In general, Bitcoin is more active on workdays than on weekends. The effect is more pronounced in the residual time series because the majority of Veriblock transactions was published on weekends. Veriblock’s activity on Bitcoin was anti-cyclical to regular activity. This became most obvious when it wasn’t. On May 2, 2019, a Thursday, Veriblock’s activity reached levels usually seen only on weekends. As a result, a record amount of more than 450,000 transactions was published on this day, 45% above the average amount. An upcoming blog post will take a closer look at Veriblock’s anticyclical behaviour and the connection between transaction timing and transaction fees.

For more information, read the BRL Working Paper “Dominating OP Returns: The Impact of Omni and Veriblock on Bitcoin” here or contact the authors directly at strehle@blockchainresearchlab.org.